The d-scan is an inline, compact and high-performance device for the simultaneous measurement and compression of even the most demanding ultrashort laser pulses

Benefiting from more than 15 years of experience, Sphere Ultrafast Photonics offers a new generation of products and services in the ultrafast pulsed laser regime 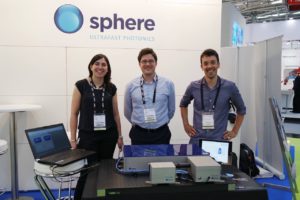 29/06/2015
Sphere Ultrafast Photonics goes live at Laser World of Photonics 2015 The laboratory is the natural habitat of the d•scan technology. Universities such us UC Berkeley and research institutes such us LOA or ELI have already adopted our technology. Everyday many ultrafast laser users have the same pain: "HOW DO I MEASURE MY FEMTOSECOND LASER SYSTEM? Everything I have tried has failed, is hard to align and use, or does not convince me in the end!”. Finally, a system that really works on the lab has appeared on the market. Do not be skeptical: Try the d•scan! 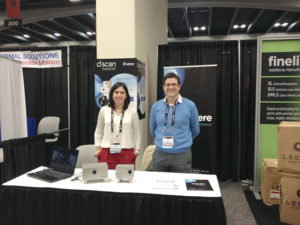 16/02/2015
Photonics West 2015 SPIE Photonics West is a world-reference laser, photonics and biomedical optics conference and exhibition: 20,000 attendees, six renowned symposia, and 4,800 R&D presentations covering a wide range of papers on biomedical optics, biophotonics, translational research, industrial lasers, 3D printing, optoelectronics, microfabrication, and more. SPIE Photonics West also has two of the most important laser (Photonics West) and biomedical optics (BiOS Expo) exhibitions in the industry with more than 1,250 exhibiting companies and a variety of new products. Photonics West includes the entire spectrum of light-driven technologies and attracts researchers, companies, and product developers from around the world. Sphere Ultrafast Photonics' presence at Photonics West 2015 was highlighted by the official launch of our new product: the d-scan single-shot.The d-scan single-shot is a compact device for measuring multi-cycle (from 10 to 50 fs) ultrashort laser pulses typically delivered by Ti:Sapphire laser amplifiers. The same d-scan system can measure from MHz repetition rates down to single-shot. 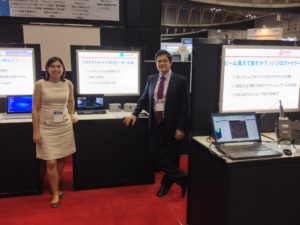 15/10/2014
InterOpto 2014 InterOpto is the international trade show that unites advanced technologies of photonics, optoelectronics and lasers from Japan and abroad. Moving the location to Yokohama in 2010, InterOpto became attracting more attention from researchers and engineers and is committed as a major source of information of photonics industry. This show showcases the latest solutions for optical technology, from precision equipment, semiconductor, communication, measurement, to biotechnology, including the exhibitions "BioOpto Japan”, focused on optical technology in bio/medical industries, “LaserTech", focused on advanced laser material processing and "LED Japan”, focused on high brightness LEDs and lighting. Many opportunities abound in InterOpto as representative of the burgeoning photonics industry. Sphere Ultrafast Photonics has made a strong presence at InterOpto 2014, by presenting the d-scan and giving a seminar on ultrafast laser characterisation aimed at providing a better understanding of the d-scan technology. Rosa Romero, CEO of Sphere Ultrafast Photonics, took the opportunity to congratulate the Japanese community for the Nobel Prize in Physics 2014, recently awarded jointly to Isamu Akasaki, Hiroshi Amano and Shuji Nakamura "for the invention of efficient blue light-emitting diodes which has enabled bright and energy-saving white light sources". http://www.optojapan.jp/interopto/en/ 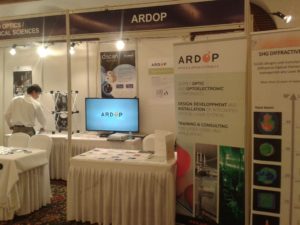 12/10/2014
ICUIL 2014 Sphere Ultrafast Photonics, together with ARDOP, is showcasing its products at ICUIL 2014, the major conference on ultrahigh intensity lasers, bringing together 200 of the world ́s best high intensity laser technologists and physicists. This important event took place in Goa, India. http://icuil2014.org/ 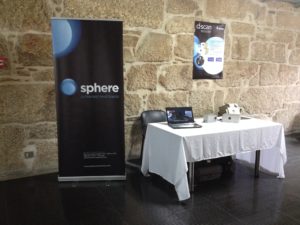 26/08/2014
ICO 23 ICO is a renowned international conference devoted to modern optics and photonics. The theme of ICO 23 was “Enlightening the future”. Sphere Ultrafast Photonics booth, featuring the d-scan technology, attracted the attention of many visitors. Also, most scientific talks devoted to the ultrafast laser regime used or referred to our d-scan technology for the most demanding applications, from high harmonic generation to ultra- high intensity laser systems. http://ico23.org/site/web/varios/welcome.php 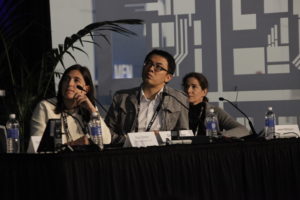 12/06/2014
CLEO 2014, Technology Transfer Program “d-scan: A New Patent Pending Technology for Measuring and Compressing Ultrashort Laser Pulses"Presented by Rosa Romero, CEO of Sphere Ultrafast Photonics The d-scan, a new patent pending technology will be presented. The d-scan allows for high-quality, robust and reliable control and measurement of ultrafast laser pulses down to unprecedentedly short durations (below 4 fs). Such performance is well above that of the best available commercial pulse diagnostics based on other technologies. The unique in-Iine configuration of d-scan allows for the best performance in the market in the ultrafast few-cycle regime. The d-scan has also two functions in one device: compression and measurement. This new technology will facilitate manufacture and optimization of few-cycle laser systems and will open the door to industrial and biomedical applications of such lasers currently hindered by the lack of a robust and accurate control for their demanding pulses. The d-scan is now available in the market and it is manufactured and distributed by Sphere Ultrafast Photonics. http://www.cleoconference.org/home/exhibit-displays-and-activities/technology-transfer-showcase/ 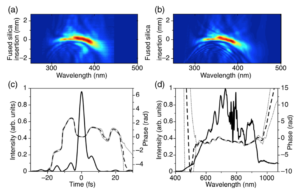 01/05/2014
d-scan technology produces 3 fs, near-single-cycle CEP-stable pulses We have temporally characterized, dispersion compensated and carrier-envelope phase stabilized 1.4-cycle pulses (3.2 fs) with 160 uJ of energy at 722 nm using a minimal and convenient dispersion-scan setup. The setup is all inline, does not require interferometric beamsplitting, and uses components available in most laser laboratories. Broadband minimization of third-order dispersion using propagation in water enabled reducing the compressed pulse duration from 3.8 to 3.2 fs with the same set of chirped mirrors. Carrier-envelope phase stabilization of the octave-spanning pulses was also performed by the dispersion-scan setup. This unprecedentedly simple and reliable approach provides reproducible CEP-stabilized pulses in the single-cycle regime for applications such as CEP-sensitive spectroscopy and isolated attosecond pulse generation.

05/03/2014
Investment from 2bPartner * Leading technology in the area of ultrafast lasers, created at the Faculty of Sciences of the University of Porto, is raising interest among customers in France, Germany and the United States of America 2bpartner, a venture capital company majoritively owned by the dst group, and manager of the fund Minho Innovation and Internationalization, announced the investment of 350 000 euros in the project Sphere Ultrafast Photonics, aiming at the development of a new technology in the field of ultrafast lasers and applications. With a highly qualified team, Sphere Ultrafast Photonics has advanced skills that will lead innovative technology to high-tech industry. The company's first product is the d-scan, which incorporates a new architecture capable of measuring and controlling ultrashort laser pulses with unprecedented durations (down to three femtoseconds). In a first stage, the target market for this product are research institutes and R&D departments of companies using femtosecond lasers for the development of equipments for medical applications or processing of materials. The largest share of these products is intended for the foreign market, and contacts have already been established in countries like France, Germany and the United States of America for the commercialization of the first units. Founded in 2007 by AIMinho, 2bpartner's mission is to identify entrepreneurs and ambitious management teams with innovative projects and ideas with great potential. Specializing in venture capital, it manages the fund Minho Innovation and Internationalization, created in 2011, with the majority of its capital acquired by the dst group in 2012. In the next two years, 2bpartner expects to conduct 20 investments in innovative projects with potential for internationalization. Therefore, entrepreneurs are encouraged to submit their business project on the company website: www.2bpartner.com. For Jose Teixeira, president of the Board of Directors of the dst group, 2bpartner puts 'a very strong focus on innovation and business diversification, supporting ambitious projects whose path will inevitably be internationalization", noting that “many ideas have value and only need an initial investment so they can flourish. This is the mission of 2bpartner and the major objective of the fund Minho Innovation and Internationalization", he concluded. http://business.leak.pt/2bpartner-investe-350-mil-euros-no-projeto-sphere-ultrafast-photonics/
« Previous 1 2 3 Next »